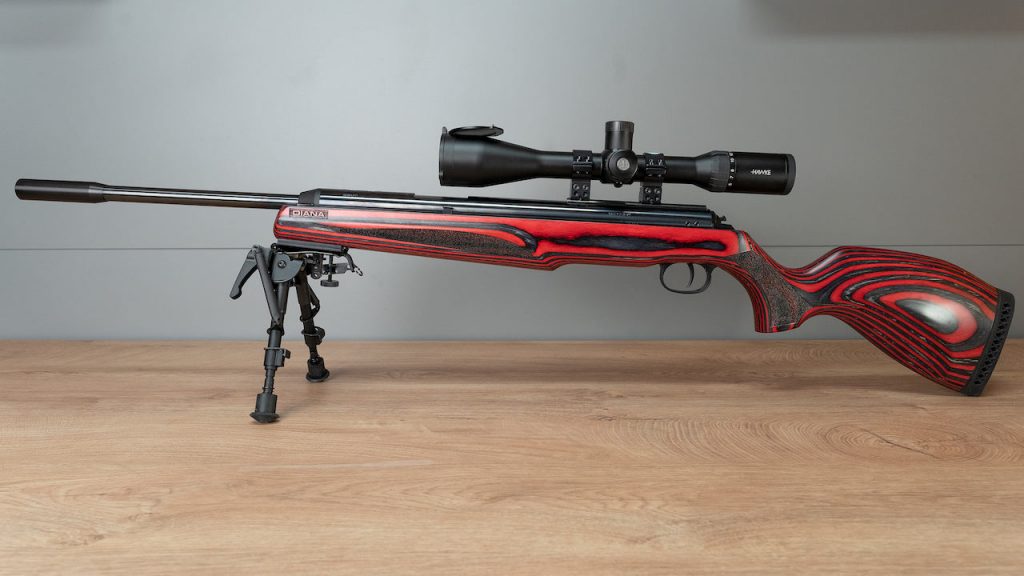 Diana 54 AirKing was one of the first air rifles I tested in my early days as a shooter.

That was when I first came into contact with Diana’s recoil system. A friend from the U.S., who accompanied me in my early days as an air gun tester, loved the old 54 AirKing. From his point of view, it was the best air rifle he knew. He was shooting the more powerful version in benchrest competitions in the US at the time. His enthusiasm then spread over to me. I was very sad when the original 54 AirKing was discontinued. So, I was all the happier when I read the announcement last year that the successor to the legendary spring-piston air rifle was being launched.

Now the time has come. I’m testing for you Diana 54 AirKing Pro with a laminated wood stock.

Let’s see if this rifle can impress me as much as its predecessor. 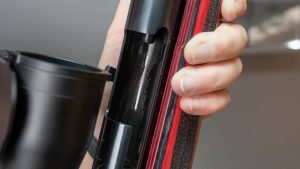 Like its predecessor, AirKing Pro is also equipped with the familiar recoil system. This is the special feature of this air rifle. If you pull the side lever all the way back, the retrograde brake system keeps the lever from snapping back and putting the shooter in danger. When shooting the more powerful version with the stronger spring, it is a great advantage that the detents of the retrograde brake system provide a possibility to pause the cocking process every few inches in order to recharge your batteries or to change hands and grab the lever in a different way.

When pulling the lever back, the system automatically pushes forward about 0.5” (15 mm) away from the shooter towards the end of the barrel. This is also the exact distance that the system retracts when a shot is released, neutralizing most of the recoil. The shooter therefore barely notices the recoil.

Diana also includes a screw-on rear sight and front sight with AirKing Pro. The latter can be mounted instead of the barrel weight used here.

Then, as with the original 54, you have the familiar open sights. The barrel weight and the system without rear sight used to be the trademark of Diana 56. Like the 54, it was also equipped with the recoil system. With AirKing Pro, Diana has now combined both rifles in one. The shooters can now decide for themselves how they want to aim and shoot.

The rifle has a fixed barrel. The pellet can be easily inserted into the barrel by opening the large breech.

The trigger of Diana 54 AirKing Pro

By now, I’m sure many shooters are already aware that Diana T06 is the trigger of all high-end Performance Line air rifles. The first stage travel, trigger pull, and trigger weight are adjustable. You have the option to make the following changes using the three screws on the trigger:

Yes, it is in fact true. The rumors in forums and Facebook groups persist that Diana now has everything produced in the Far East. That’s not true. Sure, the low-priced Action Line is produced there. Rifles at such low prices couldn’t possibly be produced in Germany.

However, the Performance Line, to which 54 AirKing Pro belongs, is made in Germany. I’m really happy about that! If I’m spending a lot of money on an air rifle, I want it to outlive me if I take good care of it, and I want it to be sturdy and fun to shoot during that time, too.

If I could wish for something, it would be that even more models that are made in Germany are launched again. Even if they cost twice as much as air rifles from the Far East. Of course, not everyone can afford an expensive rifle, I’m fully aware of that. I prefer to save for a few months longer and then be happy forever.

I was super excited to see how shooting with my AirKing Pro would feel. After all, it’s been a few years since I last shot one of the rifles with this recoil system.

I quickly grabbed a can of AirGhandi’s Finest and took my first shots. 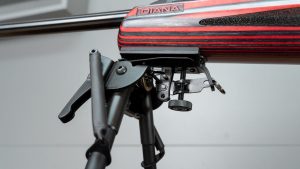 Wow! I had forgotten how incredibly precise you can shoot with the rifle! I quickly took a few shots, but then realized I still needed to focus. If I get too overconfident, the results drop noticeably.

You immediately notice how the recoil system works and absorbs most of the recoil.

That the system is a strain on any scope has already been known from the original AirKing. There is a reason why they have been called the “scope killer”. I don’t want to know how many eBay and Amazon scopes it broke.

For that reason, I mounted a Hawke Airmax FFP scope. After all, these are made specifically for air rifles and are completely recoil resistant. Should something go wrong, the 10-year manufacturer’s warranty comes into effect.

If you need advice on rifle scopes or want to buy one, you know where to find me.

The first few days I had the rifle, I took shot after shot. You can definitely call shooting with an AirKing a sport. Loading and moving around the nearly 11-pound (5 kg) rifle requires physical effort.

My conclusion of Diana 54 AirKing Pro

Why are you doing this, Diana? 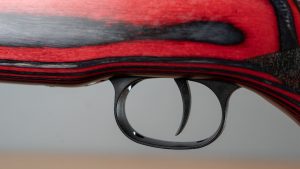 Why did you make us wait so long to finally be able to buy an AirKing again? Nevertheless, I think you’ve done everything right. The new shape of the stock and especially the red and black laminated wood stock are a real eye-catcher. For those who don’t like that, there is also the possibility to buy the air rifle with a classic beech wood stock. It is a bit lighter and also cheaper. However, I really like this fancy color.

I like that the shooter has a choice of whether to mount a barrel weight or rear sight. The latter can be completely removed when using a scope. This makes the weapon look really neat.

The precision that can be achieved with a little practice and concentration is outstanding.

A bipod can be attached in the fore-end area. This makes mounted shooting much more fun.

The only drawback of the rifle is its relatively high weight. Weaker shooters might find it a bit more difficult to handle the rifle. It does take some strength to lift and cock the air rifle.

I, for one, am thrilled.

Diana 54 AirKing Pro Laminated will get its own place in my gun cabinet.

Have you ever had the opportunity to test Diana’s recoil system?

See you next time.

For the care of the metal parts of the system I recommend you corrosion protection.

If you want to do something good for the wooden stock of your rifle, maintain it 2-4 times a year with gun stock finish. 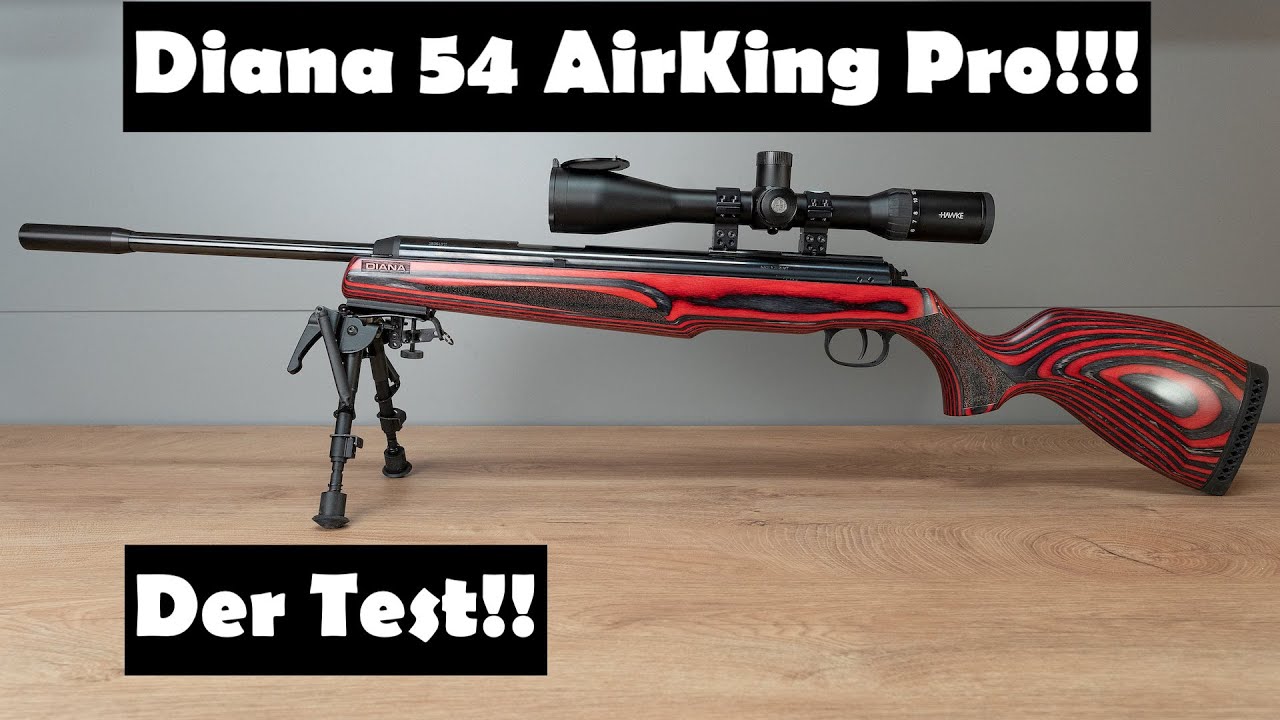