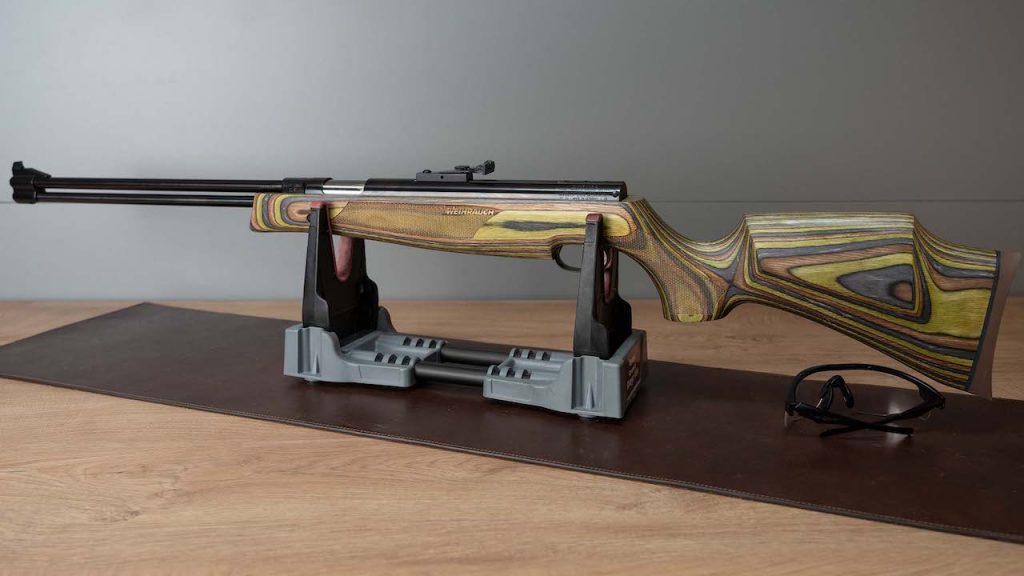 We will look at what makes the rifle special but will also talk about the rifle in general. After all, this is one of the most popular air rifles in Germany. What makes HW77 so special?

Weihrauch HW77 and the shorter model HW77 K are spring-piston air rifles with a fixed barrel.

Weihrauch HW77 K has a loading gate. Theoretically, you can have a scope extend beyond it. The loading gate is open at the top and to the right side. With a little dexterity, you can even load pellets into a rifle that has a long scope attached. But that would be a very long scope.

HW77 K is the sister model to Weihrauch HW97. The difference is for one thing the open sights which HW77 K has. HW97 can only be shot with a mounted scope.

The rifle comes from the factory with a stock that has a raised cheek piece. This has the advantage that despite the higher line of sight of HW97, you can comfortably hold the rifle in a shooting position. The cheek piece of HW77 K is designed for open sights and is most comfortable to shoot this way. However, it is of course still possible to shoot the rifle with a scope. It can be mounted with a scope mount on the 11mm prism rail.

The special thing about HW77 Special Edition is definitely the stock. It’s a laminated wood stock made of brown, green, and blue wood. I haven’t had an air rifle in this color combination before. I really like it. The colors have a hunting feel to me. I think this comes from the use of the green wood.

As with all Weihrauch air rifles, HW77 K Special Edition is extremely fun to shoot! Since I’ve already done a review of HW77, I don’t have to prove anything in terms of precision. That’s why I shoot HW77 today with open sights, i.e., via rear sight and front sight. That the model is beyond reproach is shown by the fact alone that this rifle and its sister model Weihrauch HW97 are used by many competitors.

Cocking the rifle is simple. Once the button under the barrel end has been pressed, the barrel can be pushed down. This works practically without effort. Then you can easily insert the pellet. The breech chamber is quite large in size, so the loading process can be done comfortably. 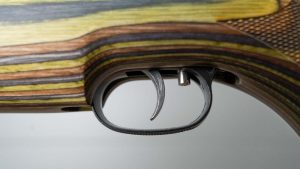 During the loading process, it is strongly recommended to hold the cocking barrel in spite of the safety catch on the rifle. There are many pictures on the Internet of shooters sustaining finger injuries from having their finger pinched.

Returning the barrel, just like cocking itself, is done completely without scratching and creaking.

Now you just have to deactivate the automatic safety with your thumb, then you can shoot.

The match trigger Rekord is excellently adjusted at the factory. Here you can see that the quality control at Weihrauch works perfectly. No air rifle leaves the factory untested.

You think there’s nothing better in the recreational category than the Weihrauch match trigger Rekord? Yes… There is one better option!

On the model of the outstanding V-Mach trigger, the company AirJoe has developed a new tuning trigger. I had the opportunity to test it and was so impressed that I have listed it in my store www.jabolo.de.

Not only has the trigger weight been significantly reduced, but the trigger blade has also been moved further back. This gives shooters a unique opportunity to take their recreational or competitive Weihrauch rifle to a whole other level. The AirJoe tuning trigger fits all Weihrauch air rifles that use the Weihrauch match trigger Rekord.

I’m sure it will find its way into lots and lots of competition air rifles from Weihrauch. 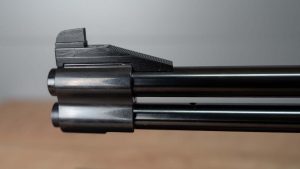 Every shooter who likes to collect rare air rifles and doesn’t have a HW77 K in their gun cabinet yet should get one. As expected, the shooting performance is outstanding. The special stock brings variety to the gun cabinets otherwise filled with brown wood.

Handling is flawless. The workmanship of the rifle is also, as you would expect, without flaws.

For pellets, as with all Weihrauch air rifles, I recommend AirGhandi’s Finest. They work outstandingly well in HW77.

Do you have one or more Weihrauch air rifles at home?

What’s your favorite one?