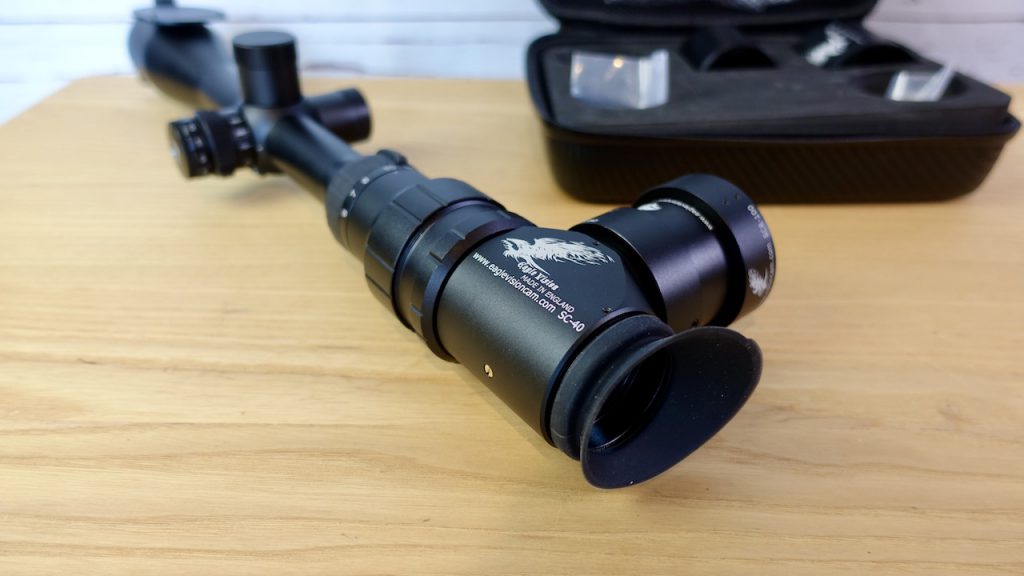 Today I will show you my new side-cam adapter from Eagle Vision Cam.

Why do you need a side-cam adapter? 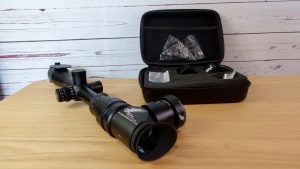 You probably know the videos of famous YouTubers in which you can look through the scope with them and watch the flying pellets. I think this is pretty cool. Of course, I won’t be filming any rodents or pigeons being hit by my pellets. I will concentrate on the targets that are allowed in Germany and let you participate in benchrest shooting or long range shooting with my side-cam adapter.

Why do you use the Eagle Vision Cam adapter?

The Eagle Vision Cam side-cam adapter is the fourth scopecam adapter I’m testing. In the beginning, I didn’t invest much and also didn’t expect much. Therefore, the result wasn’t the best. The first adapter was from eBay for 20€. It was a disaster. It was almost impossible to mount. If you managed to transfer the picture from the rifle scope to your mobile phone, you had to look out that no insect touches the adapter. Otherwise, everything was misaligned again. So, I took the next step and bought a scope-cam adapter from Discovery Optics. It was much better, but unfortunately not perfect either. It took decent pictures when it was mounted, but the construction wasn’t really stable.

My next adapter was then a side-shot adapter which was stable and well thought out. I used it with a smartphone for recording. It worked out well until I got a new smartphone with two camera lenses. The phone constantly tried to focus automatically. A feature that is usually great, but if you want to control the focus via the parallax wheel of the rifle scope, it’s a catastrophe. So, this was my third adapter I sold again.

Finally the solution – the side-cam adapter!

Initially I decided not to pursue the topic of scopecam adapters anymore. 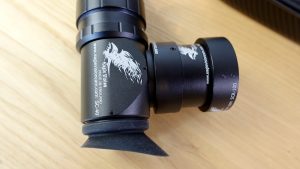 One year ago, I invested in the high-quality digital camera Sony RX100 MK IV. When I took the website online, the quality of my mobile phone photos was no longer sufficient. I wanted to offer you more. The camera is amazing and even has a slow-motion function to slow down the video a thousand times. I found this fascinating because I had planned to film the pellets from up close. But what I found out later was that you can only record a sequence like that for three seconds. Try to run from the camera to the rifle in three seconds and quickly release the shot to get a great picture. It won’t work. Since I unfortunately don’t have an assistant or a camera team, I’ve never used this feature.

While watching YouTube videos the other day, I suddenly came across the Eagle Vision Cam side-cam adapter. I saw a video where someone was using the same Sony camera as I was. Of course, this caught my interest immediately. So, I followed his link below the video and configured my adapter.

The configuration options of the side-cam adapter

The possibilities to configure this adapter are various. First you choose the diameter of the riflescope eyepiece. In the second step you choose how you want to distribute the light coming through the scope. 50% to the shooter and 50% to the camera, or as I did it: 25% to the shooter and 75% to the camera. I think this is better because I want to provide you with great shots.

Then you choose which recording device is supposed to take the pictures. There are options for smartphones, GoPro cameras, but also various other camera models. I selected my Sony camera, of course.

In the video here you can see how the quality of the adapter is in combination with the camera.

Now you know how the pictures, which you will surely see in the future in one or the other video, are taken.

I hope you enjoyed my review.

I’m looking forward to your feedback

HERE you can go directly to the manufacturer’s website where you can buy the adapter!