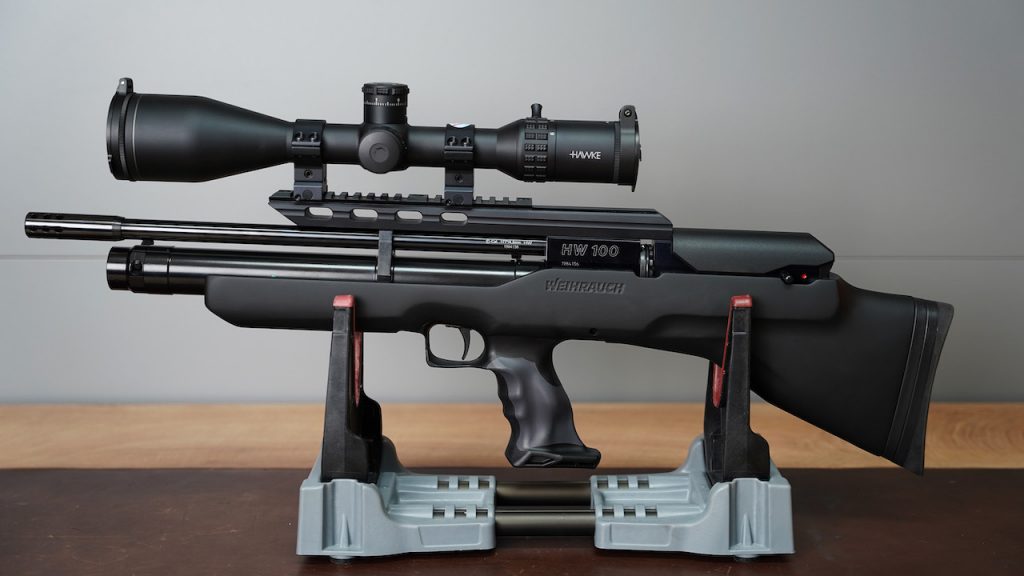 Weihrauch HW100 Bullpup was first introduced at IWA in 2019. The incredibly compact and high-quality rifle impressed many visitors at the time, and over the years has found many shooters who have purchased the air rifle.

Of course, I read the feedback in the forums and Facebook groups. Now it was time to have a look at Weihrauch HW100 for myself. That’s why I purchased the air rifle and did the review for you today.

Weihrauch HW100 Bullpup is available with two different barrel lengths. The ultra-compact version comes with a 12.2” (31 cm) barrel. The second option is the version I’m showing you today: A still very compact air rifle with a 16.1” (41 cm) barrel. Surely some shooters will ask themselves whether the longer HW100 Bullpup is then also more accurate than the short version.

But I can reassure you. The barrel length doesn’t matter much when it comes to air rifles with less than 7.5 joules. You can see this for example in my test of Weihrauch HW44, where I shot an outstanding result at 25m even with an extremely short barrel. So, you can buy the riffle you like best.

It’s incredible how much great technology is packed into such a compact rifle. Starting with the barrel. It has a 1/2″ UNF thread with a thread length of 20mm. You have to consider this when choosing a silencer. If you want to mount a DonnyFL Tanto or DonnyFL Koi, then we have special adapter caps so that you can also mount the absolute top silencers on Weihrauch air rifles. The combination is outstanding, of course.

The barrel itself has a choke. This ensures a smooth trajectory after the pellet exits the barrel. A silencer or the compensator included in the scope of delivery further calm the air turbulence behind the pellet. This is the reason for the excellent precision you see in the shooting test in the video.

Of course, Weihrauch HW100 Bullpup also has a regulator built in. It ensures that no matter the pressure in the cartridge, the performance of the rifle always remains constant. In the chrono test, we determined a constancy and tested an average deviation from the mean of less than 3 ft/h (1 m/s).

The system of the gun is the same as the previously tested Weihrauch HW100. It is a system that has been tried and tested for years and was revised again in 2020.

HW100 was given a new cocking lever, with the option of conversion to a biathlon cocking lever. In addition, two new threads have been added to the housing and valve block. A Picatinny rail can be screwed onto it. Like the biathlon lever, it is also included in the scope of delivery!

Otherwise, a few small things were changed inside the valve block.

The range of the cartridge is also excellent. The manufacturer states that you can make up to 380 shots with 200 bar. I have not counted that 😉 In the shorter Carbine version, the cartridge is also a lot shorter than the version I’m showing you. It goes without saying that you don’t have a 380-shot range then. 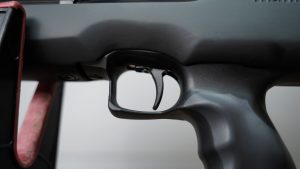 It has a two-stage adjustable trigger. The trigger weight was set to 7 oz (200 grams) at the factory. This is what I measured during the trigger test.

The safety is manual. When deactivated, the 14 rounds can be fired after cocking each time. The safety can be operated from both sides, which is also a special feature of HW100 Bullpup.

The scope of delivery of Weihrauch HW100

Weihrauch HW100 Bullpup also shines when it comes to the scope of delivery. Normally, we are used to more and more cost-cutting measures and less and less in the packaging. That’ s not the case with Weihrauch Sport! They’re much more generous. Thanks to two included filling probes, you can either fill HW100 Bullpup directly from a bottle with the 5/8″ thread adapter by unscrewing the cartridge or use the included 1/8″ filling adapter. The latter can then also be converted to a Foster Quickfill. Thus, the shooter is given all the options to supply the gun with air.

In addition, Bullpup also comes with a Picatinny rail that you can attach to the top of the 11mm prism rail.

Two 14-round drum magazines are also included, as is an air release screw to depressurize the cartridge. Weihrauch recommends depressurizing the cartridge if you won’t be shooting the rifle for more than a month.

The structural features of HW100 Bullpup

The system of HW100 bullpup is set far back. This results in outstanding handling, especially when shooting from a standing position. Most of the weight of the 8.3 lbs. (approx. 3800 g) rifle is close to the body, making the rifle feel very light to the shooter. The adjustable rubberized butt plate also helps with comfortable handling. 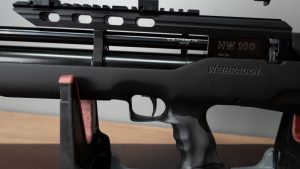 The stock has a soft touch finish and is of extremely high quality. It has a great haptic.

Due to the special design of the grip, the rifle can be held by both left-handed and right-handed shooters. The new, forward-mounted lever can be cocked either on the left or right side. When purchasing, please make sure that you get the configuration you want.

A short Picatinny rail can be attached to the fore-end at the bottom. It is also included in the scope of delivery. A second grip or a bipod can be mounted to this rail. However, when selecting your accessories, please make sure that they fit the rail.

How do you like HW100 Bullpup? Do you like the Made in Germany rifle, or do you prefer the longer versions?

I hope you’ll join us again next week. 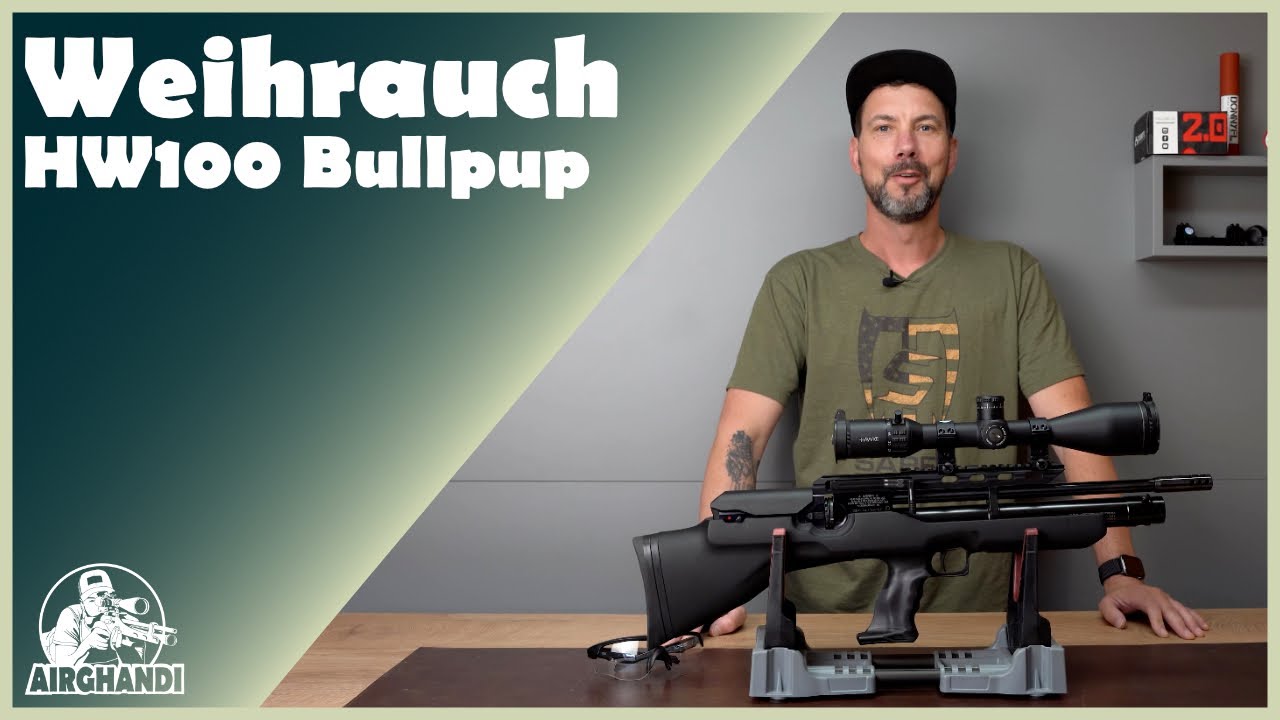 Lower Picatinny rail too short for my AccuTac bipod